Another incident involving contentious status on a private Facebook profile could soon end up in court: a police inquiry was launched against Dejan Milojević from the town of Aleksinac, in southern Serbia, after his comments posted on the social network were allegedly threatening to Serbian PM’s safety (Criminal Code of Serbia, Article 138).

Speaking for a local news portal Aleksinac.net, Milojević stated that on Wednesday morning, July 8, a team of some 20 men from Belgrade came to his house, members of armed tactical units and the Special Unit for Cybercrime, accompanied by two policemen from the regional headquarters in Niš. According to Milojević, police searched his house and annexes looking for guns, “backing up data from computer and phones” that were then seized. Milojević had his attorney and two witnesses present during the police search.

The contentious status is still visible on his profile. 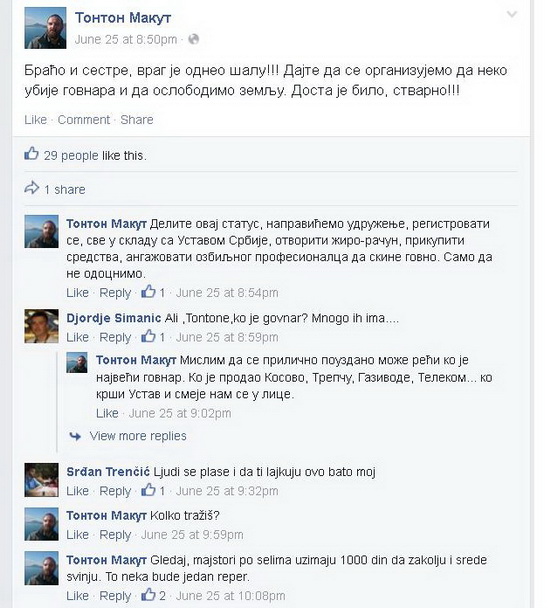 Status reads: “Brothers and sisters, things got dead serious. Let’s organize someone to shoot this asshole and liberate the country. Enough is enough!!!”

Status was posted in the evening of June 25, while the next day Milojević explicitly distances himself from the intent.

Comment reads: “And, of course, I was joking about the murder; I detest violence, even if it’s against such a prick and a bum. As [another Facebook commenter] says, after all he won the elections. So now we have to endure. To the end of his term or our own end.”

The description of police actions singles this case out from similar investigations into comments posted on social networks, raising the issue of vague police authority in the digital environment. Police accessing personal Facebook profile clearly constitutes a violation of secrecy of letters and other means of communication, guaranteed by Constitution of the Republic of Serbia (Article 41). Possible exceptions are solely based on a court order issued for the specific contentious Facebook profile, of which there is no information at the moment. Having been denied further access to his personal Facebook account, Dejan Milojević’s freedom of expression and information is limited.

During the search, police have seized Milojević’s computer and phones (in accordance with Criminal Procedure Code, Article 147), authorized to do so without a court order. However, accessing communication data stored in those devices without a court order is prohibited.

A Facebook profile itself presents a collection of personal information of its owner, contains private communication, and constitutes a part of the owner’s personal identity, which in no way fall under Criminal Procedure Code provisions concerning devices. So, even when the devices are seized, neither police nor prosecutors can access communication data stored in those devices without a court order.

At the same time, Serbian-speaking cyberspace is filled with threats to journalist Dušan Mašić who initiated “Seven thousand”, a cause for commemorating 20 years of genocide in Srebrenica. Threats were made in clear incitement of violence on July 11, the day scheduled for the gathering. Assault and threats particularly grew stronger after the online hate speech was picked up by some traditional media.

The public prosecutor failed to act once again.

Inconsistent enforcement of law, with the prosecution office and police swift to act in some and taking no action in other cases, creates legal uncertainty which cannot lead to establishment of rule of law.

Share Foundation warns that “seizure“ of a personal digital profile represents an extremely intrusive and legally vague measure, particularly having in mind the international standards of privacy protection and freedom of expression.