At least one Serbian security service negotiated the purchase, while the Ministry of Defense comes up as a trial user of the spy software made by Hacking Team (HT), a company from Milan whose electronic databases were made publicly available last week by Anonymous and Wikileaks.

Not long after the Italian company’s Twitter account had been compromised, more than 400 gigabytes of data were published, including internal documents, client lists as well as source code.

Huge HT databases are still in the initial phase of analysis by experts, journalists and activists around the world. Share Foundation team singled out a company correspondence related to Serbia, in which members of the Security Information Agency (SIA) and the Ministry of Defense have participated, along with a private company located in New Belgrade.

The negotiations lasted until the end of 2011, partly with mediating services from a private company for trade and manufacturing of computer equipment “Teri Engineering“ from New Belgrade, whose CEO arranged meetings, software testing and negotiated the price. In an internal discussion, this Belgrade company was mentioned as a “player” which could introduce the spy software manufacturers “to the whole central Europe”.

According to the available information. the first contact from Serbia was established after the international exhibition of internal security equipment MiliPol Paris 2011, when a member of the Security Information Agency (SIA) contacted a branch of Hacking Team, asking if a presentation of HT software in Belgrade could be arranged.

The software is known as the Remote Control System, RCS, based on the targeted spreading of viruses on computers and mobile phones of persons under surveillance. Most clients using this system are states and security services from across the world. 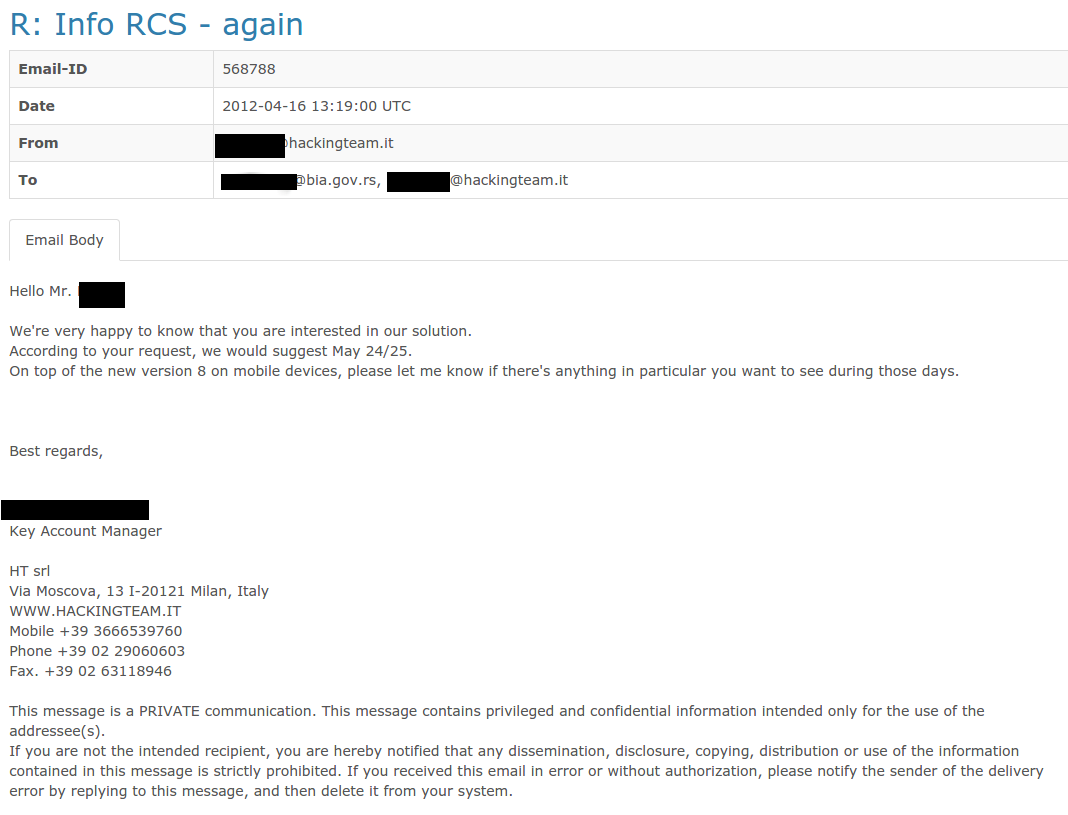 The initial presentation in Belgrade surely took place, but the correspondence dies down until April 2012, when the same SIA member addresses the HT manager, who will notify him that the new version of the software will be available in May and that they could meet at the end of that month. 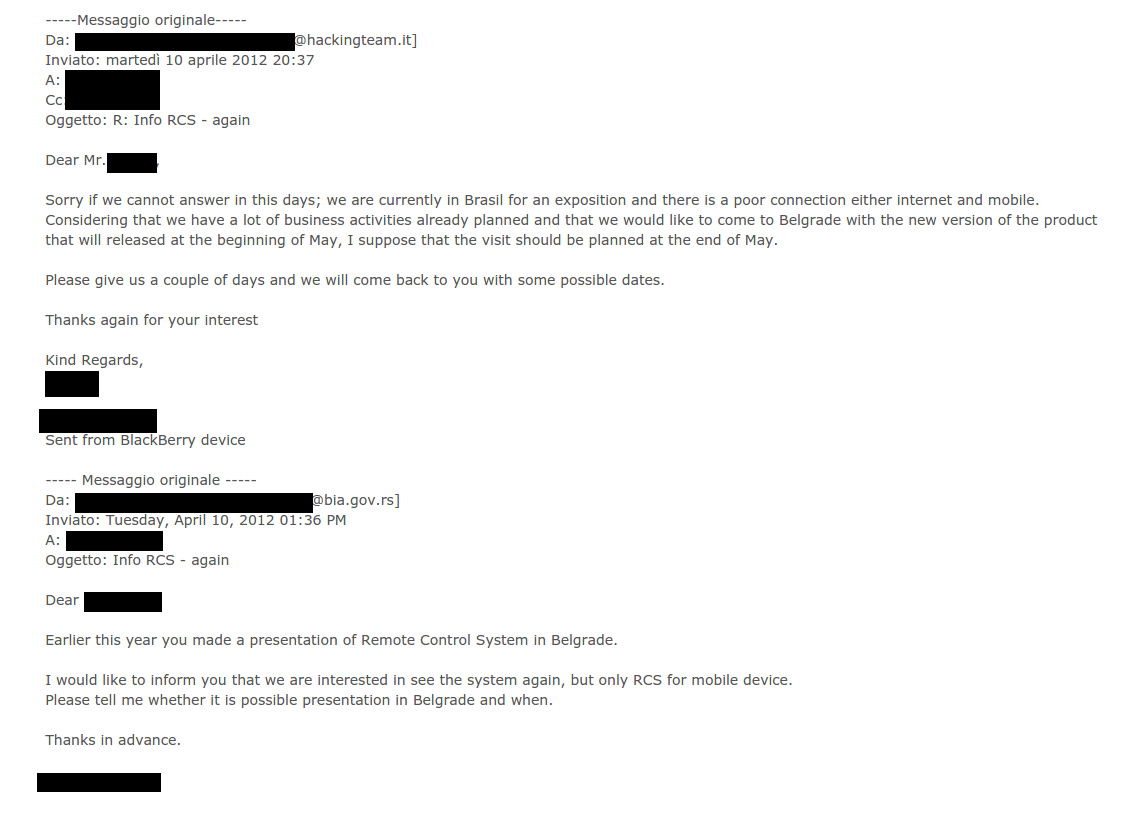 In the internal correspondence of the HT manager regarding the planned presentation in SIA Headquarters in Belgrade on 24 and 25 May 2012 it is noted that the SIA was “already introduced to the software in their Headquarters in the beginning of the year and a month ago in Rome”. It is stated that the SIA is now calling them to test only the software for mobile device surveillance. One of the HT representatives communicating with the Serbian security service member is mentioned in “Spyfiles 3”, a Wikileaks database with information related to many global manufacturers and vendors of spy equipment and software.

MSA searching for the spy virus

Independently of the communication with the Security Information Agency, at the same time the CEO of “Teri Engineering”, a private company from Belgrade, addresses the Hacking Team managers, with a recommendation (and a percentage for closing the deal) from Nice Systems, an Israeli company specialised in electronic surveillance and data analysis. In the correspondence, the intermediary from Belgrade lists MSA which is an abbreviation for Military Security Agency (“VBA” in Serbian) as a possible client, and offers local implementation services. 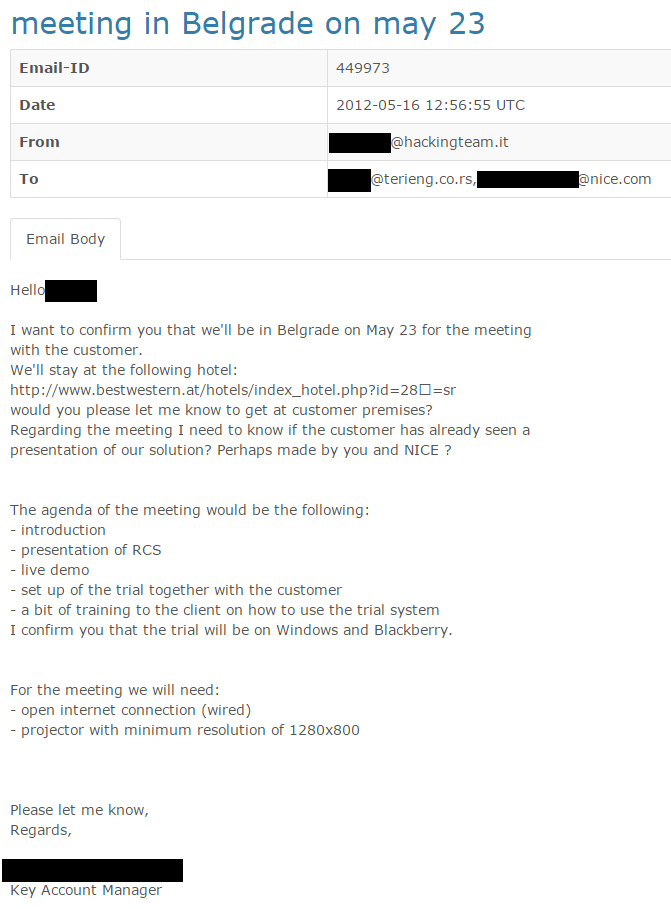 Negotiations on price soon followed, and the intermediary – despite the hefty commission for her company and the partners from Israel – managed to significantly lower the price from close to 500.000 euros to around a half of that amount. A person with an email address on the Ministry of Defense domain participated in the correspondence regarding the technical details of activating the virus and using the infected phone. 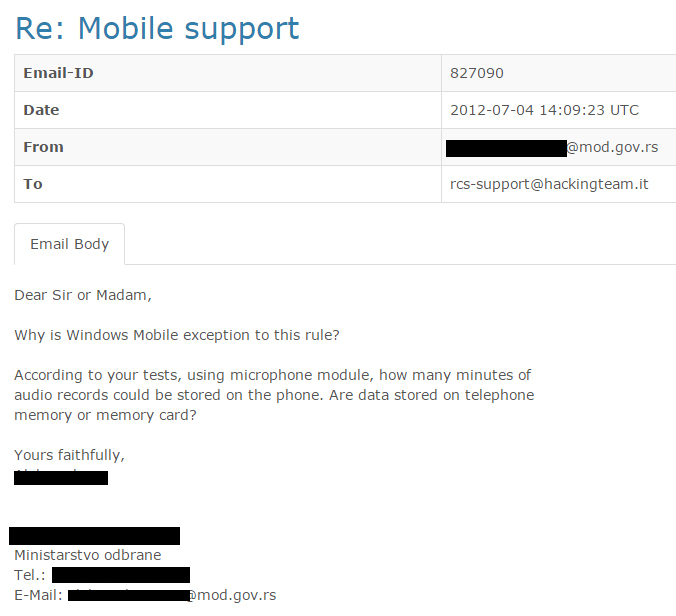 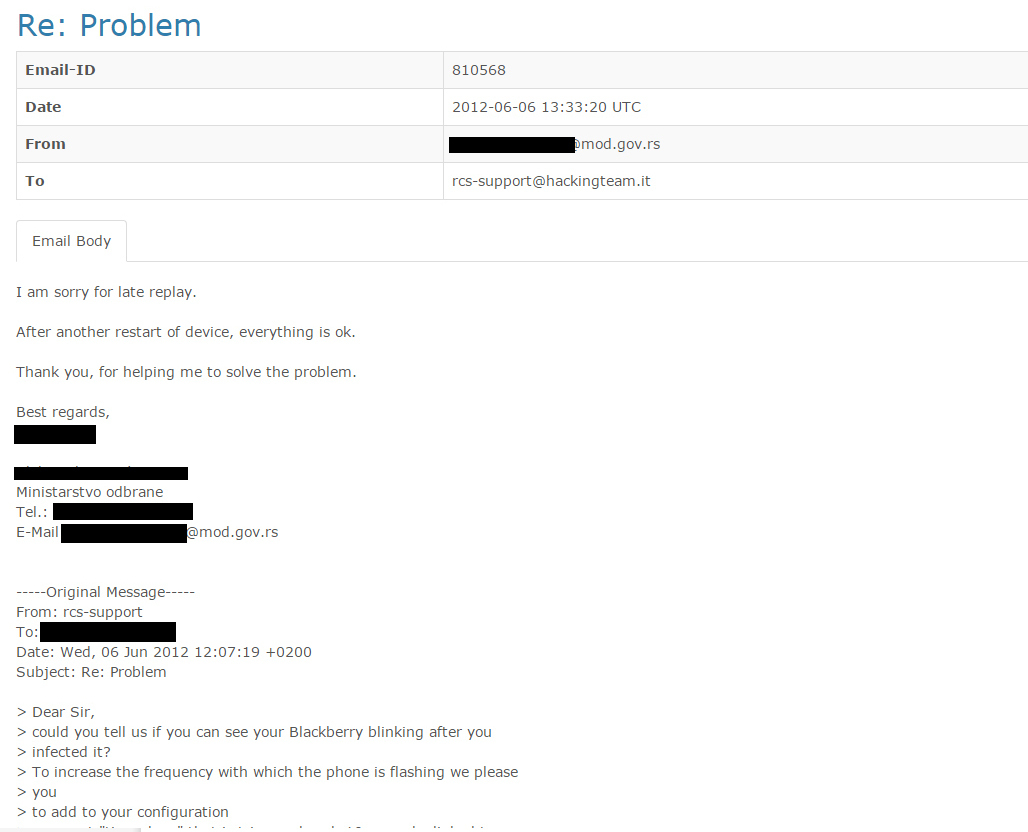 In late fall 2012, CEO of “Teri Engineering“ from Belgrade notified HT that because of possible “problems with the budget”, the procuring entity (instead of MSA/Ministry of Defense) could be Telecom Serbia, “100% state-owned company”.

Same year in September, after the trial was finished, the intermediary from Belgrade told the HT representatives that their system had a problem “which does not exist with the competitors”. It was Gamma, a company from London, whose software FinSpy, as it is known, soon found its buyer in Serbia. 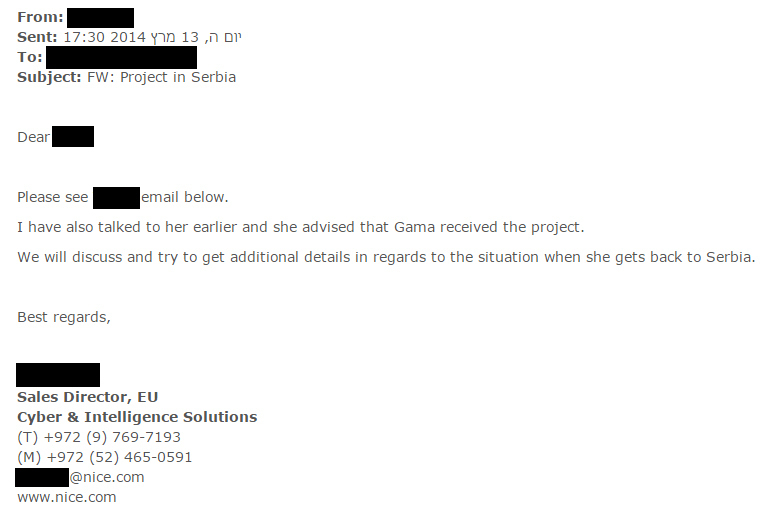 Communication continued at the start of 2014, when there is a news from Belgrade that the budget for this deal was finally adopted, but negotiations stumble because of the price. Another obstacle were the parliamentary elections (March 2014) and the expected changes in the Ministry of Defense and security agencies, with new personnel appointments awaiting.

Hacking Team tried to arrange another presentation in Belgrade, aiming to divert their potential client from the competition. At that moment however, the competing spy software is already in Serbia.

In May last year, the communication from Belgrade totally dies down.

How do the agencies monitor infected devices

Until now, several ways how the Hacking Team’s system uses exploits in targets (e.g. devices) were identified. It is an advanced graphical interface in which most operations are performed with a single click. With the system, buyers also receive an instruction manual how to execute different types of infections, physically and on the internet.

The most common way of infecting targeted devices via the internet is to send infected documents (.doc files) by email, which when saved automatically start downloading spyware in the background and install a “backdoor” on the infected device, therefore implementing HT spyware.

In the control panel, there is a list of all infected devices, with their maximum number depending on the specific product. It is important to note that every system is tailor-made and that the price of the system depends on its functions, supported devices (PC, Mac, BlackBerry, mobile devices) and operating systems (Windows, Linux, OS X).

Primary use of this software is to monitor the system on which the spyware is implemented and not be recognised by the anti-virus program, which is why it is necessary to update the system regularly, so the price of yearly maintenance is 20% of the total value of the licence (75.000 €). 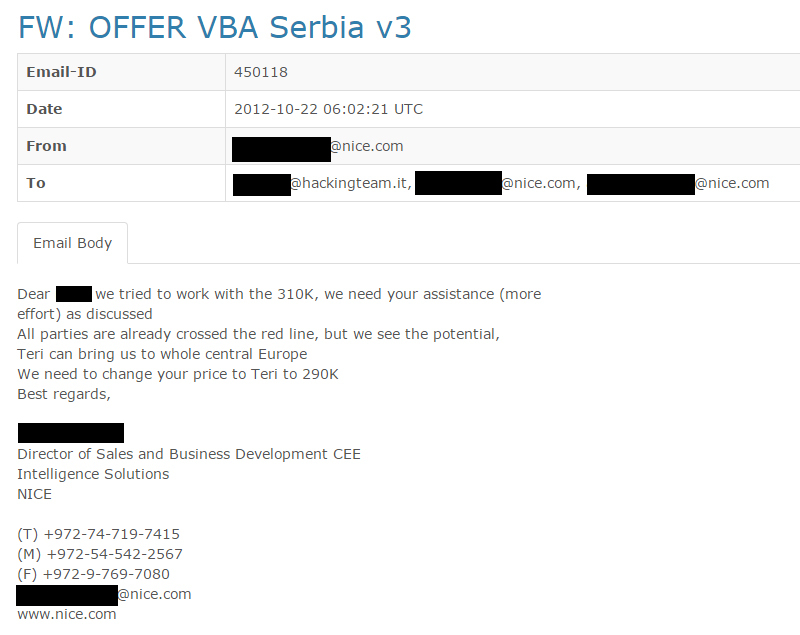 As part of its server, Hacking Team also had a KnowledgeBase, where it was described in detail which data from which devices and operating systems can be extracted. There are also instruction how to infect devices, as well as analysis of different anti-malware software. 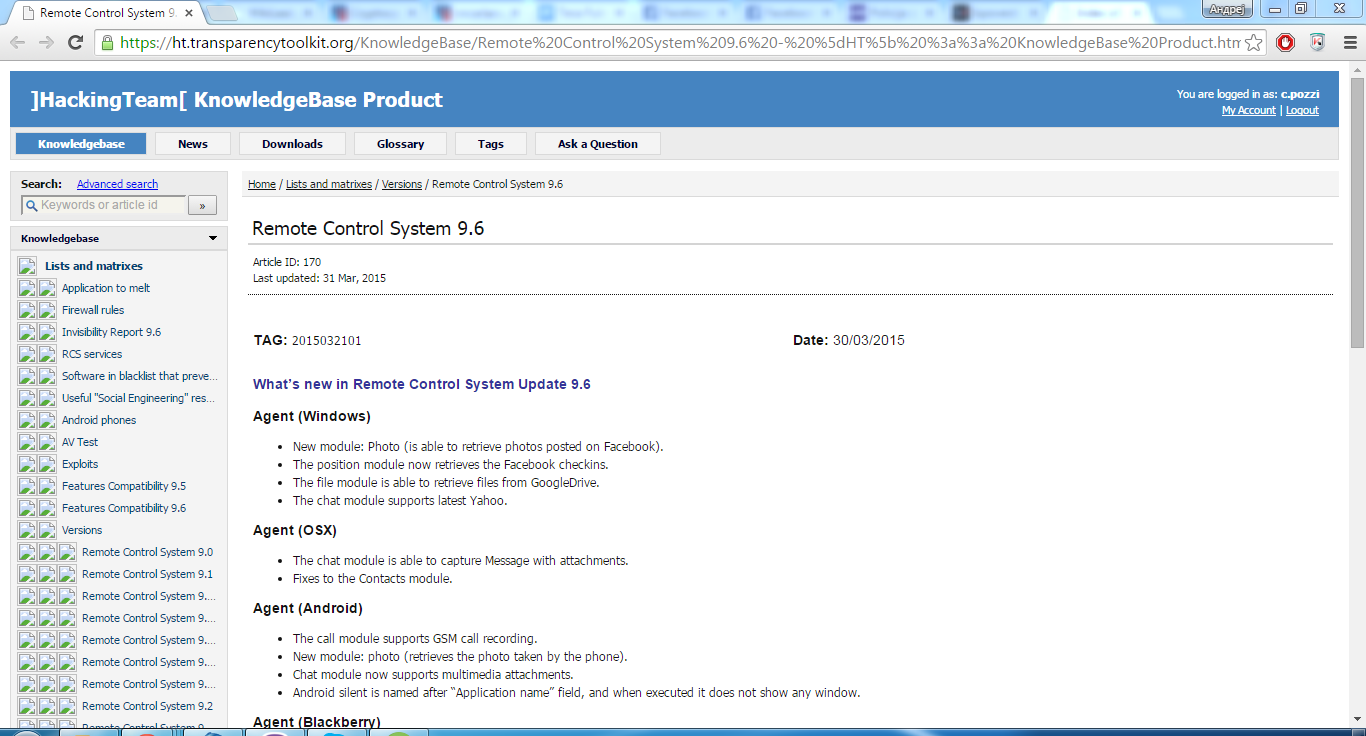 For technical support, user would open a ticket on Hacking Team’s website and then their team would do a reconstruction of the problem in a laboratory and found a solution, which can be another reason why the maintenance price is relatively high.

Users of RCS software are mostly governments or government agencies. The system works on the basis of proxy servers which “launder” the traffic through several countries, so it is virtually impossible to technically determine who performs surveillance and where is the surveilling operator located.

During the past several years, Hacking Team, a manufacturer of surveillance software and equipment, has been targeted by civic organisations because of its active role in the global development of the surveillance industry without civilian control, as well as selling the software to countries known for heavy human rights abuses, even when it represents a violation of UN sanctions, in case of Sudan.

Hacking Team was a key actor in the research carried out by CitizenLab at the start of last year, because of the sale of RCS to various governments. Their product was used for tracking the award-winning Moroccan news portal “Mamfakinch“ in 2012, as well as human rights activists from the United Arab Emirates.

Last year, Privacy International warned of the possibility that this company had received million and a half euros from funds connected to the Region of Lombardy in 2007. From the leaked financial databases it can be seen that Mexico, Italy and Morocco are the biggest Hacking Team clients, with “orders” valued at several million euros in total.

Share Foundation wrote about the legal framework for import of this kind of software in Serbia back in 2013 because of the “Trovicor” case, stating that rules for dual use goods must be applied and that a permit from the Ministry of Trade, Tourism and Telecommunications is obligatory. In October 2014, the European Commission updated the list of dual use goods, inter alia because of the need to control IT intrusion software (‘spyware’) and telecommunication and internet surveillance equipment. In accordance with this, the Government of the Republic of Serbia has also adopted aDecision in May 2015 to fully comply the national control list of dual use goods with the European Commission’s list.

On the other hand, use of equipment such as the one being sold by Hacking Team is not explicitly prescribed as a measure that state bodies can use. If we assume that certain organisations can be authorised to use this equipment, in our legal system that wouldn’t be possible without a court decision in accordance with the law. Using it in any other way would be an obvious violation of human rights which are guaranteed by the Constitution of the Republic of Serbia and numerous international conventions.